Marine Electric was created over 40 years ago based on a project of 4 friends, due to the increasing demand for electrical assistance in the nautical world. They decided to dedicate their automotive workshop as a Service Centre for onboard electrical systems.
In that period, in Sanremo, opened the harbour of Portosole which created a market in the pleasure yacht sector that needed professionals capable of providing the clientele with competence in the electrical sector.
Marine Electric thus entered in this market as one of the major nautical operations on the Italian and French rivieras
In the early 80’s Roberto Gaziello joined the company, and then became a partner. With his passion for the nautical, after some years, he became the Owner implementing a constant growth of the company, together with his partner Stefania Calteri, that from the beginning was responsible for the administration management.
The company evolved, step by step, with the pleasure yacht universe; training and creating loyalty with the technicians with strong backgrounds and also willing to obtain further experience and competence.
Today we can state, with pride, that Marine Electric has become the focal point of reference for those that arrive in the port of Sanremo and necessitate a solution for any onboard electrical or electronic need.
Upon the retirement of Stefania, Federico the son of Robert, became partner and general director. With his dynamism he has contributed to a further growth of the company to the level it has reached today, increasing the offer of services to the clientele.
Currently Roberto is enjoying his retirement, but his passion leads him to remain strongly in contact with the reality of the company from his “buen retiro” the self-built yacht “Nok”. He remains available, when requested, to assist and advise due to his past 40 years of profession and experience.
Still today the company has the headquarters where the company was born, and we welcome you in Via Fratti, just a few 100 metres from Portosole; we are ready to assist you in all your needs of our competence.
….TODAY !!
We regularly service clients in the Ports of Genoa, Arenzano, Varazze, Savona, Finale Ligure, Loano, Alassio, Andora, Imperia, Marina di San Lorenzo and Aregai, Portosole, Bordighera, Menton Garavan, Monte-Carlo, Fontivielle, Cap d’Ail, Saint Jean Cap Ferrat, Villefranche, Nice, Saint Laurent du Var, Antibes and Cannes. 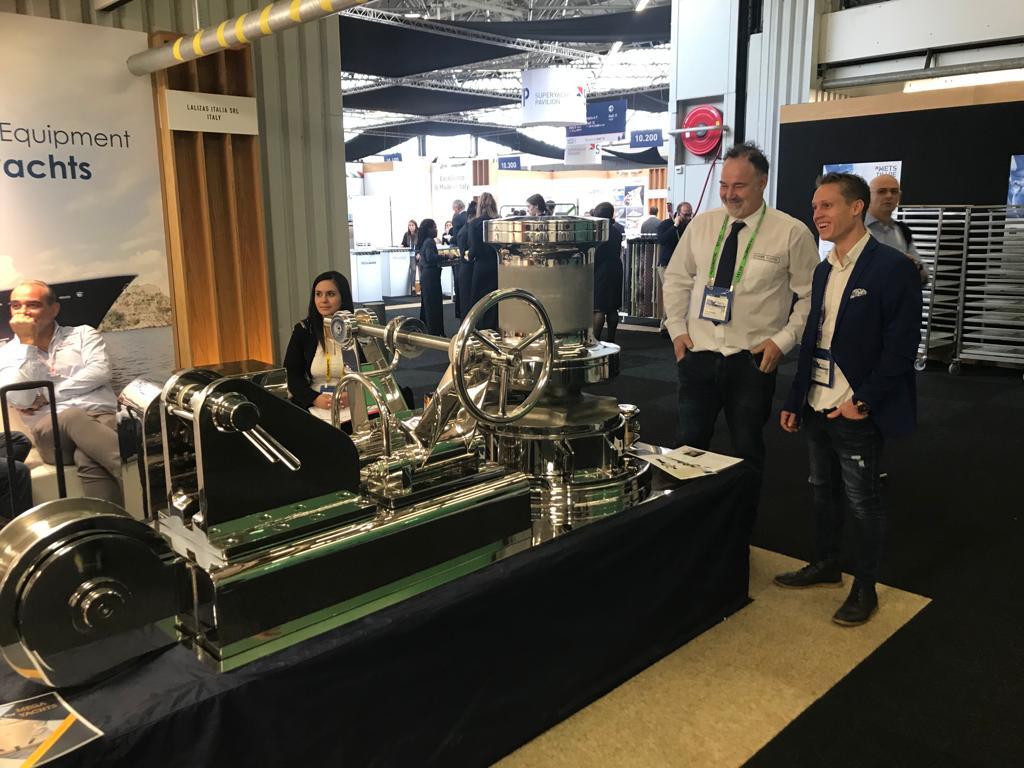 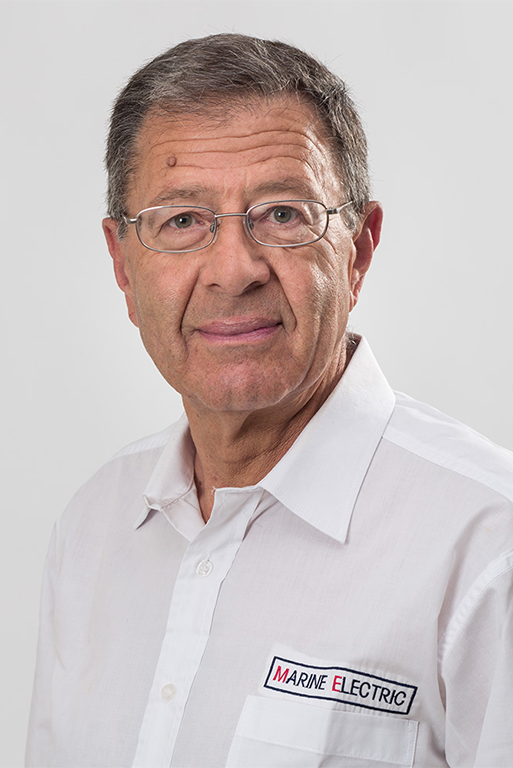 Working onboard yachts, from the construction of the harbour Portosole. Initially as an apprentice, on sailing yachts and previously on sand boats. His experience is a guide to us always. Due to his passion, apart from creating Marine Electric, he decided to build his own yacht. 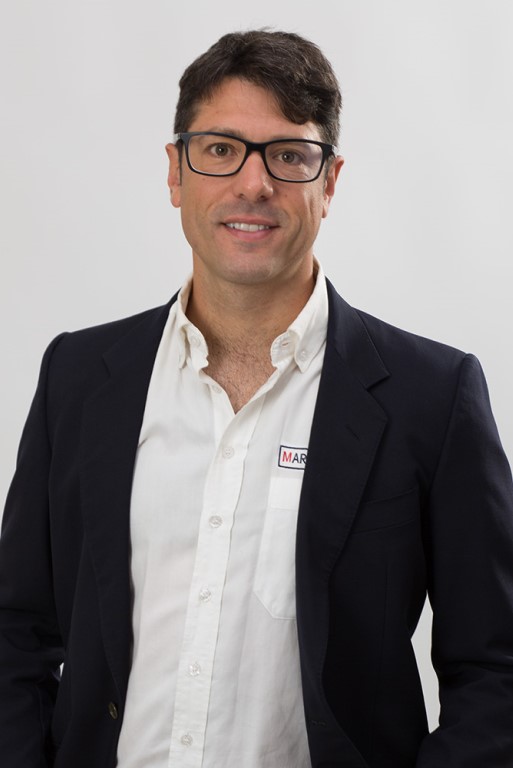 Hanging out in the workshop as a teenager and then joining as an apprentice. He has grown professionally dividing his time between work and study, but always following his father’s footsteps who at that time was Owner and Managing Director.
Having matured the necessary experience, both as a naval electrician and company management, three years ago took possession of the helm of the company in his hands. His dynamism and inspired with the same passion as his father for the nautical universe, he guides and co-ordinates his team with a sole objective: satisfy the daily requirements of the Shipowners and Crew. 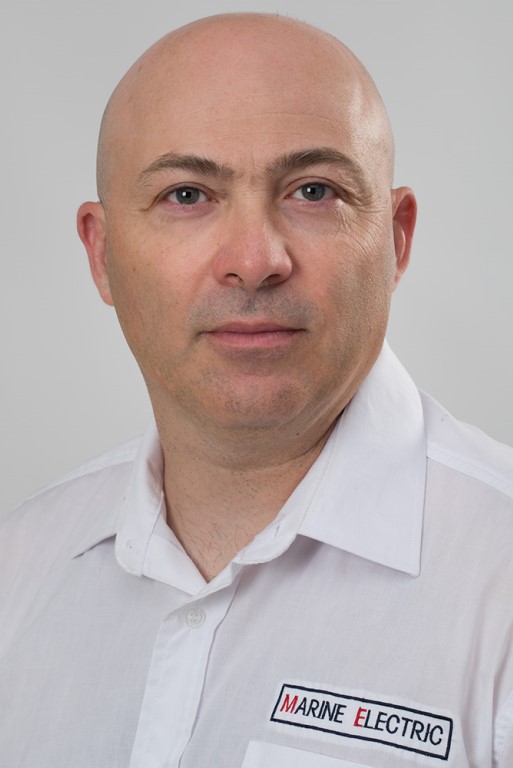 He has grown professionally with the company, and to which he has contributed and has become a costant referral point. His undeniable know-how matured in 35 years in the sector do not know unsurmountable obstacles to solving the most difficult concerns. His passion for electrical motors and generator sets has led him to dedicate most of his time to the creation and realisation of electrical panels and systems in general. 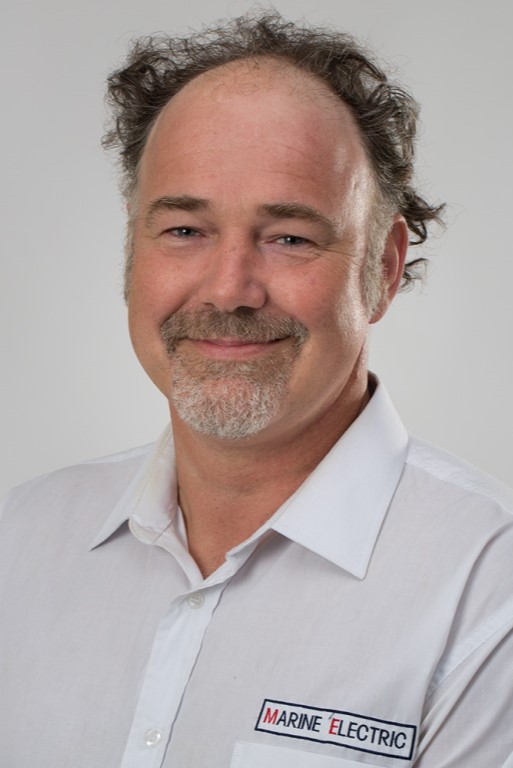 More than 15 years of experience, he is more than a professional naval electrician, and has specialised his services in the revision of winches, windlasses and capstans. He also a wide experience in the revision and repair of desalinators and onboard hydraulic systems. His passion is the ventilation and aeration systems. A jovial and helpful nature leads him to automatically assist in the scouting and refurbishment of spare parts. 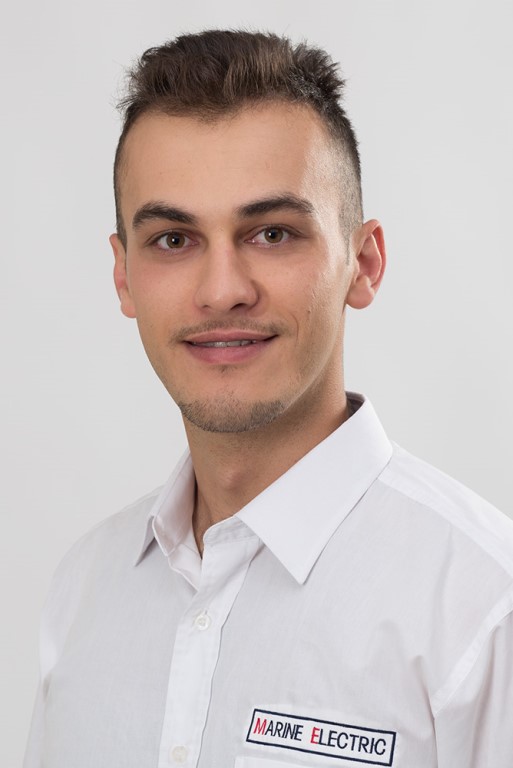 He began with an internship, he then finished his studies and obtained the Diploma of the Professional Technical Institute with the specialisation as Electrotechnician and joined us just over 7 years ago and enjoys working at the bench. Dynamic and ecletic, he is maturing competence in metal structural works. His main fields of work are the revision and repairs of pumps; Gianneschi, Calpeda, Hamman and many other brands. 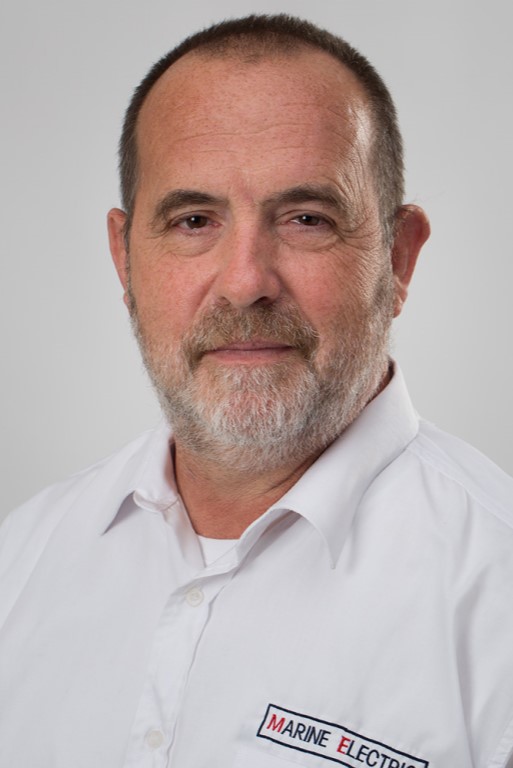 In our team with his notable skills, permits us to offer the best solutions in electronic and navigation equipment. A specialist in NMEA networking, satellite antennas, installation of equipments and navigation networks, with a natural intuition and talent in recognising and solving all problems arising with onboard electronics. 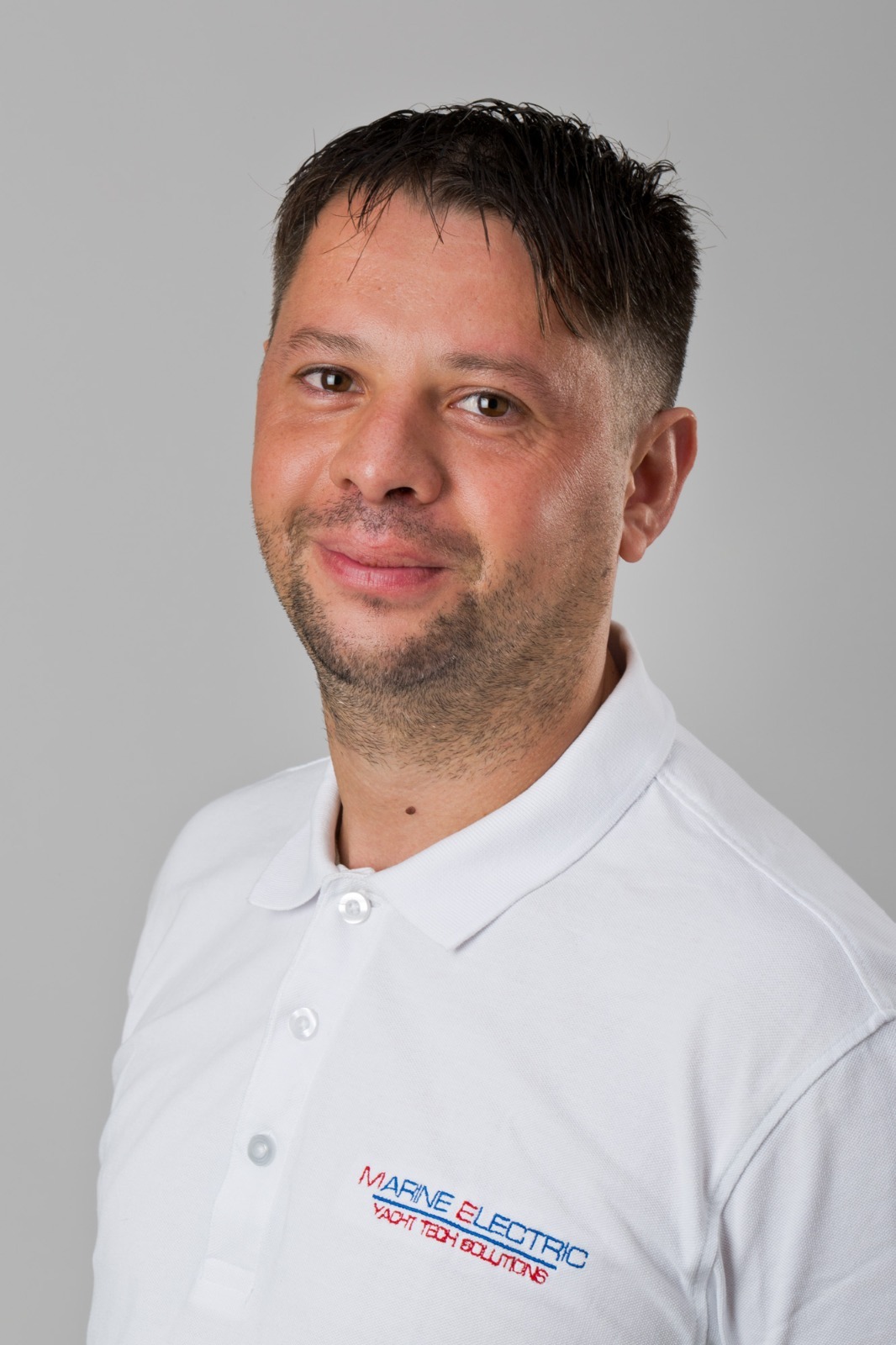 Refrigeration engineer
His arrival in our team has enabled us to increase our range of services, and we are now an official service center for Dometic, Climma and Frigoboat. His services include official technical assistance with cold rooms and air conditioning systems and he is Rina registered. He is doted with state of the art instruments, and for us and our clients is an important figure onboard. 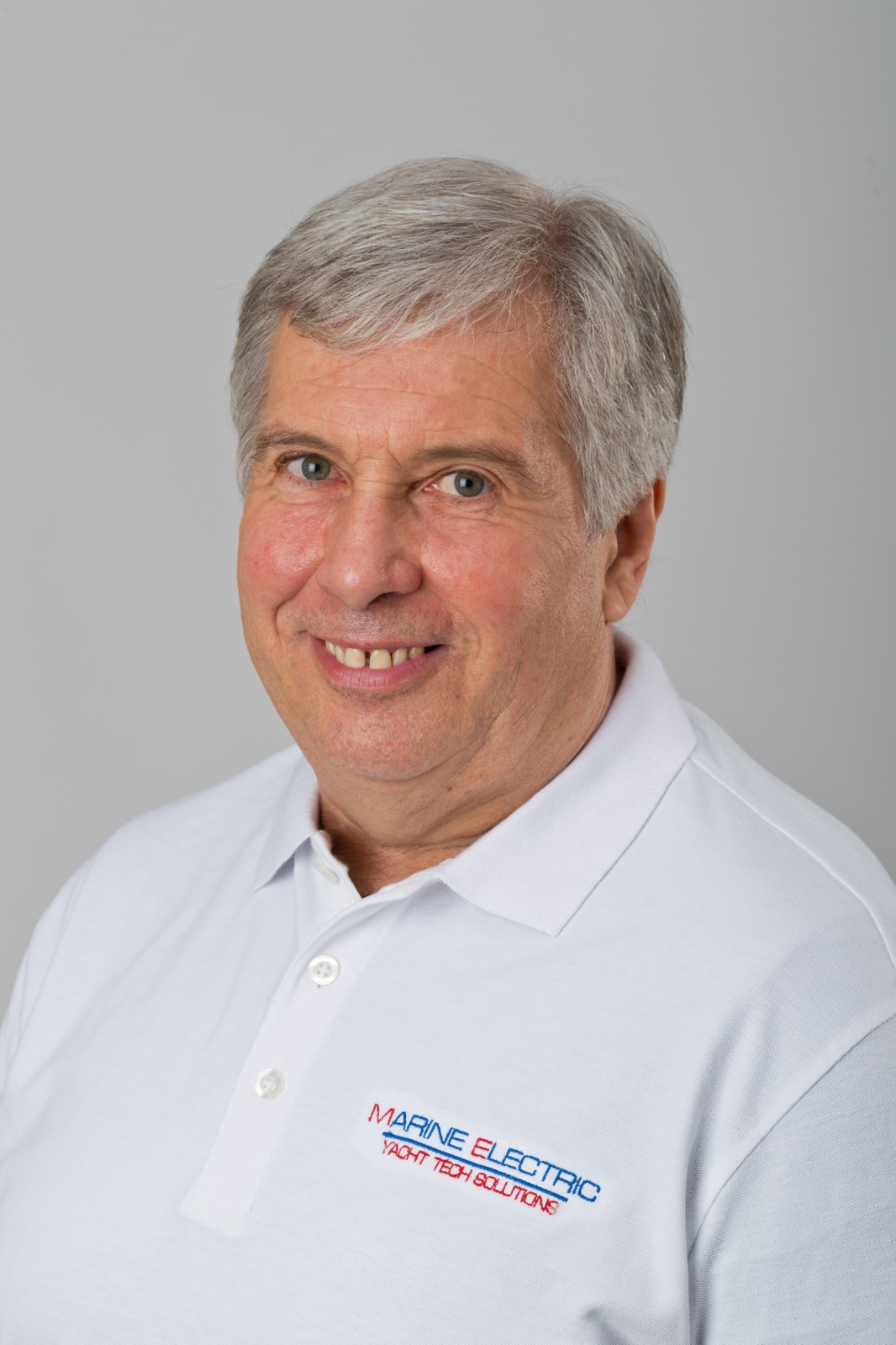 Warehouse worker
Due to the increase of demand of our services and increase of the staff, it was decided that to improve the organisation and reply to our client’s need to increase the team with a person dedicated to assisting the operational staff with acquirement. His experience in acquirement and as warehouse manager in the nautical world, as well as his capability of sourcing and obtaining the most unusual spare parts makes him a focal point in the warehouse and workshop both for his colleagues and our clients. 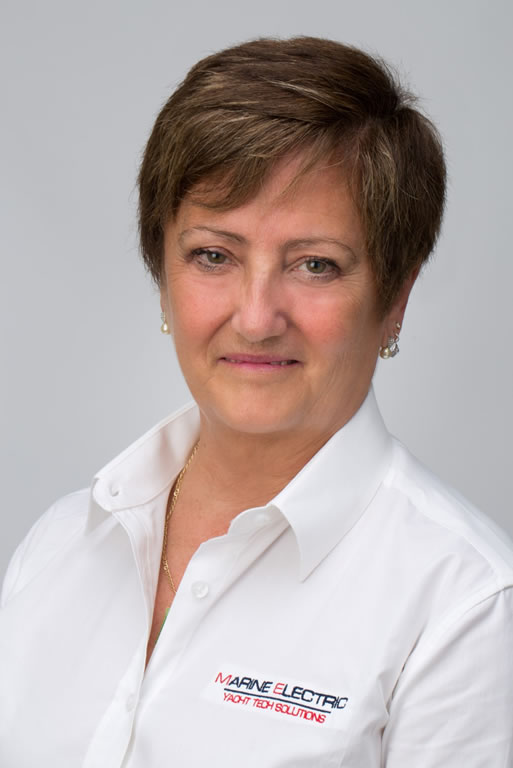 Accounting expert, she follows the administration of the company. For many years in the nautical world. All your administrative requests will be followed up. 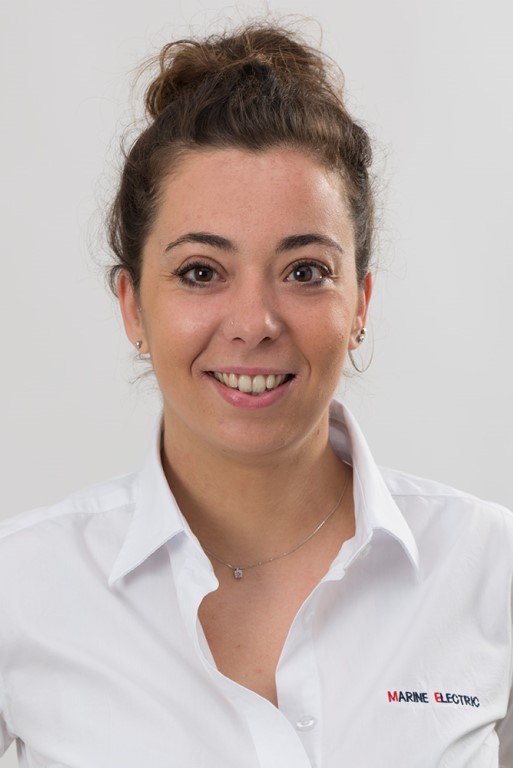 Our newest member, her role at the front desk; mainly dealing with the initial request for services, which she carries out with willingness and understanding. 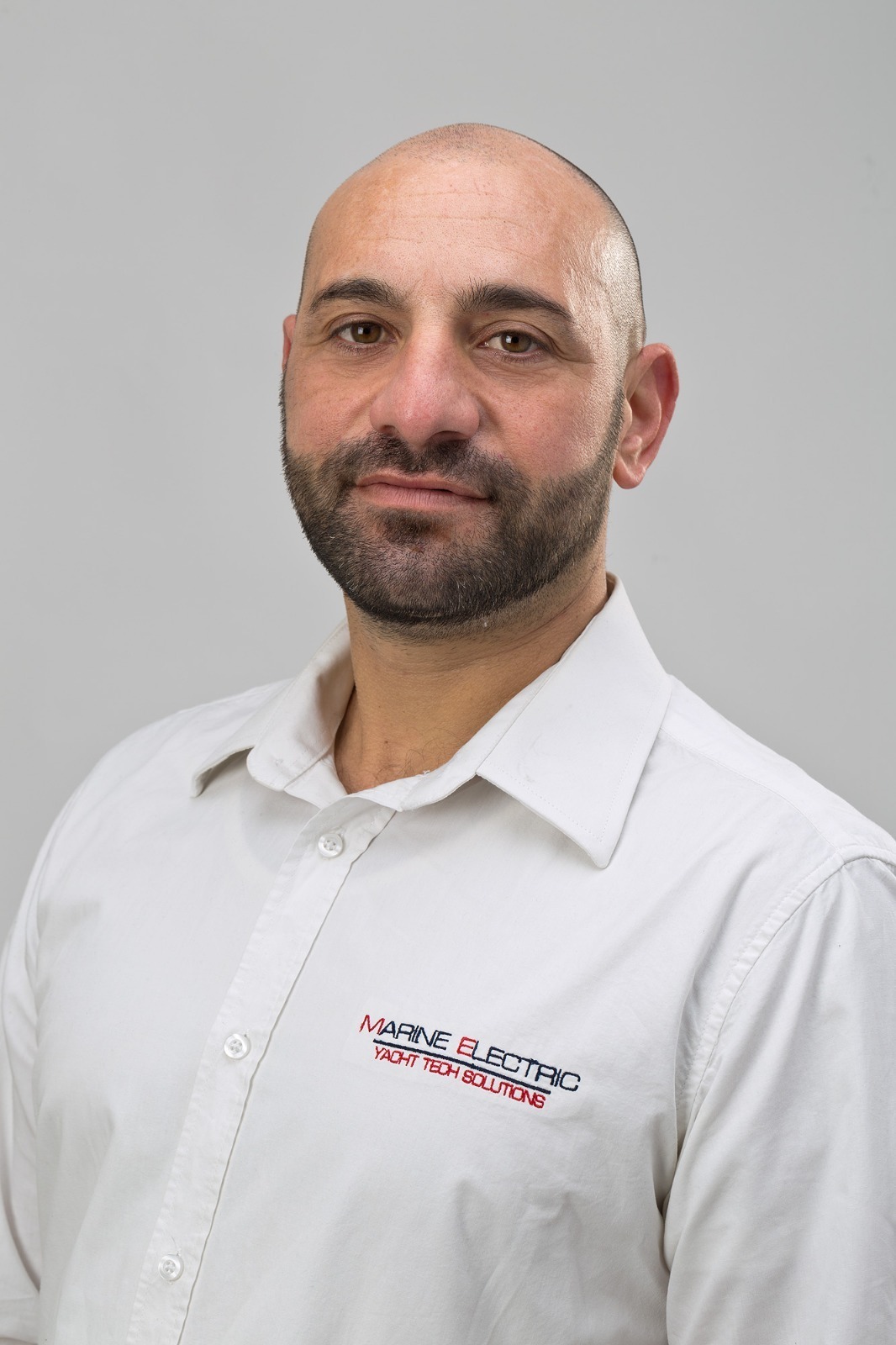 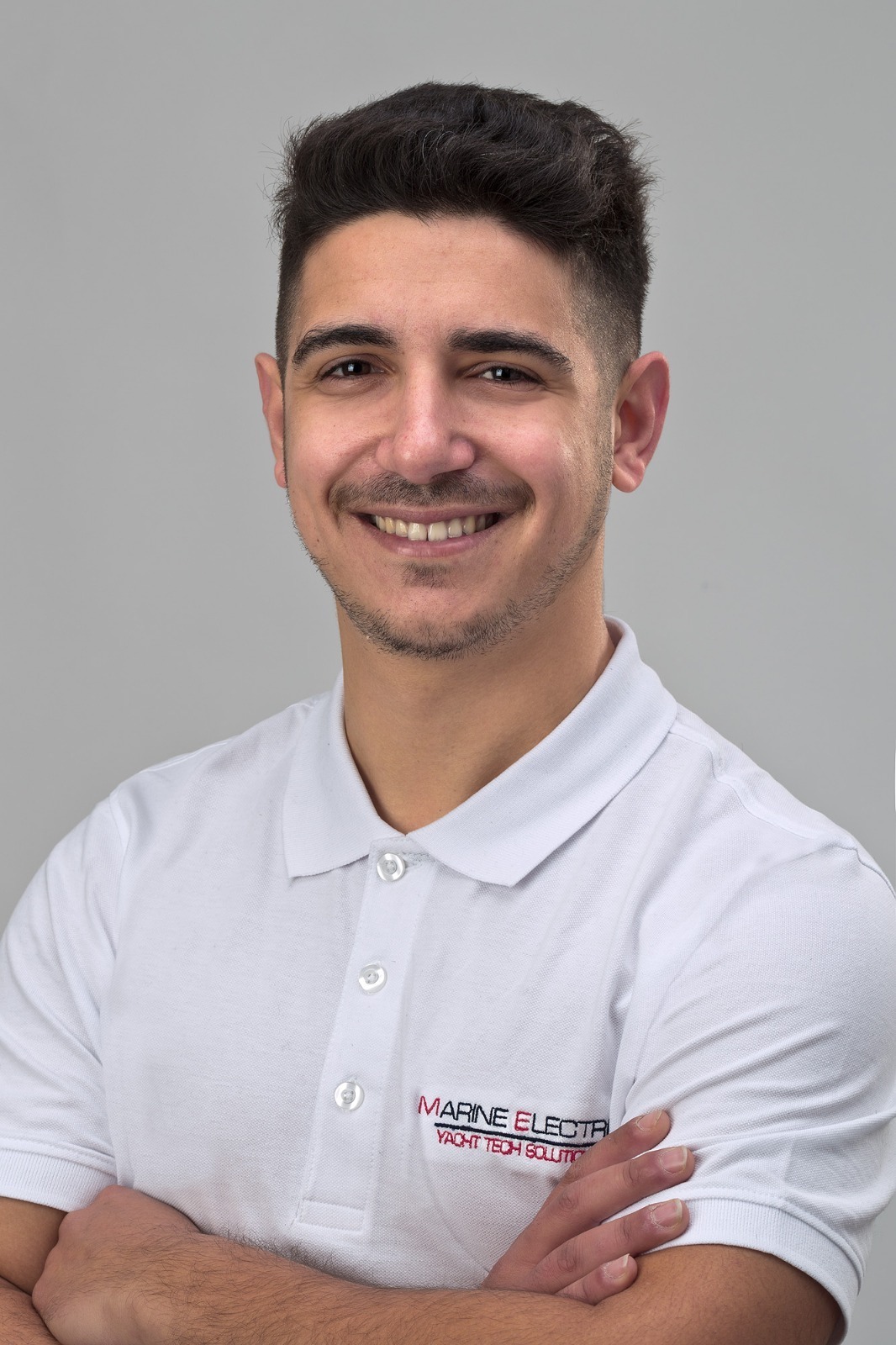